Alexa, are you listening?

The Amazon Echo is vulnerable to a physical attack that allows an attacker to gain a root shell on the underlying Linux operating system and install malware without leaving physical evidence of tampering. Such malware could grant an attacker persistent remote access to the device, steal customer authentication tokens, and the ability to stream live microphone audio to remote services without altering the functionality of the device.

This vulnerability is due to two hardware design choices:

Here we present a technique for rooting an Amazon Echo and then turning it into a 'wiretap'.

Prior researchers were able to boot into a generic Linux environment from an external SD Card attached to debug pads made available on the base of the Amazon Echo device. They made their processes, details of the debug pins, and bootable SD Card image available on a Github wiki [1]. In their white paper [2] they further speculated how to 'root' the Amazon Echo.

Here we extend their work by booting into the actual firmware on the Echo, install a persistent implant, gain remote root shell access, and finally remotely snoop on the 'always listening' microphones.

Removing the rubber base of the Amazon Echo reveals 18 debug pads. The purpose of these pads was mapped out in the paper by Clinton et. al. [2]

By connecting to the exposed UART pads we can watch the device boot, informing us of its configuration.

Unfortunately/fortunately during boot we are not dropped into a shell or a login prompt and the U-Boot sequence cannot be interrupted.

The main MCU of the Amazon Echo is a DM3725 digital media processor by Texas Instruments with an ARM Cortex-A8 CPU. During boot these chips have a three part boot process. First a bootrom executes from a masked ROM which performs some minimal hardware configuration. It then loads a secondary bootloader (X-loader) from a boot device into the internal RAM on the MCU. This bootstraps the device before loading a third bootloader (U-Boot) into external RAM and executing it. U-Boot then loads the kernel and passes control to it.

The configuration of the Echo is such that it will first attempt to boot from an SD Card connected to the exposed debug pads before the internal eMMC unit. This boot order configuration is determined by the state of several hardware pins on the MCU during boot and cannot be changed without a hardware revision/modification of the main board.

By correctly formatting a SD Card with X-loader and U-Boot in the correct partition we can boot from this card and into a U-Boot commandline interface.

As the mask ROM communicates with the SD Card in SPI mode and we are not booting the main OS from the card, we don't need to connect to all of the SDMMC pads shown in the figure above.

The mapping from MMC to SPI is as follows.

We also need to apply +3V to the SDMMC POWER pad and to the SD Card and connect one of the GND pads.

The image below shows our lab Echo wired up to an external SD Card breakout board and connected via UART to a laptop. 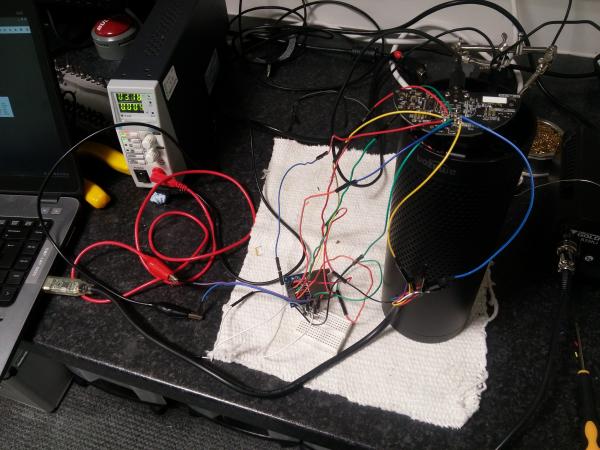 An image of a bootable SD Card can be found on [1], however in our PoC we only really need the first FAT32 partition of this image containing the X-loader (MLO) and U-Boot binaries.

During power-up the device boots from the MLO and U-Boot binaries on the SD Card. This U-Boot implementation allows us to interrupt the boot process and enter into the U-Boot command line interface. From here it is possible to inspect the contents of the file systems on the internal memory and reconfigure the kernel arguments.

The diag partition holds a rather curious diagnostic environment which we have not fully examined. 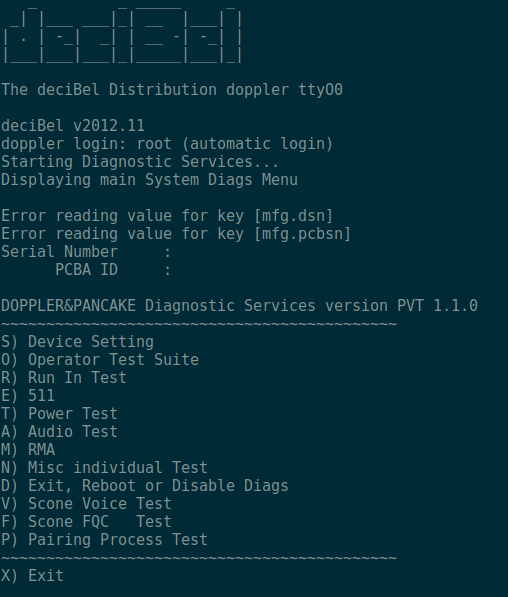 The main file system and kernel we want is either on main-A or main-B and switches between them on each firmware update. To find out which one we need we can examine the file systems from U-Boot with the following commands:

Now we know which partition we want to boot from we can configure U-Boot to boot from this partition. We also need to change the kernel arguments to mount it as a writable file system and to run /bin/sh rather than the normal startup up scripts.

Once booted a root terminal is presented over UART, bypassing all authentication.

At this stage no initialisation scripts have been ran and the device reboots every few minutes. To prevent we need to start a watchdog daemon which is used to preiodicaly reset a reboot timer.

To spawn the watchdog daemon, run the following command:

The environment is now stable however none of the main services have been started and the device is not fully functional. We do however have full read/write access to the entire file system and can go about making modifications.

In our PoC we install a reverse shell script in the data partition (which is normally mounted on /var) as it is writable in normal operation. To mount this partition we can issue the following command:

Now we have the partition mounted we can add persistence.

We also need our reverse shell to be spawned on boot. We can do this by adding the following line to the end of one of the initialisation scripts. We picked /etc/init.d/varlocal.sh as it is one of the last ones that gets ran and it mounts the data partition.

Once our reverse shell is installed we can remove the external SD Card and UART connections and reboot the Echo into its normal operation.

During boot the initialisation script spawns our reverse shell. If we listen on port 1337 on our remote device the Amazon Echo should connect to it with a root shell:

Once we had root we examined the processes running on the device and the scripts that spawn these processes. We were able to understand how audio media is being passed and buffered between processes and the tools that are used to create and interact with these audio buffers. Using the provided 'shmbuf_tool' application developed by Amazon, we created a script that would continuously write the raw microphone data into a named fifo pipe which we then stream over TCP/IP to a remote service. On the remote device we receive the raw microphone audio, sample the data and either save it as a wav file or play it out of the speakers of the remote device.

This technique does not affect the functionality of the Amazon Echo.

The script to be ran on the Amazon Echo is as follows.

To save the audio stream on the remote device run the following,

or to play it from the speakers.

This vulnerability has been confirmed on the 2015 and 2016 edition of the Amazon Echo however the 2017 edition is not vulnerable to this physical attack. The mitigation implemented by Amazon was to join the +3V input pad with the MOSI/CMD pad somewhere on the main board, this effectively disables SPI communications with an external SD Card, preventing external booting.

To identify if a device is vulnerable you can check the original pack for a 2017 copyright and a device model number ending 02. 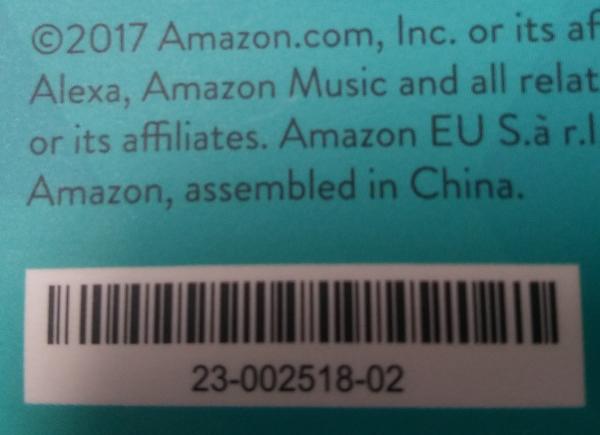 Rooting an Amazon Echo was trivial however it does require physical access which is a major limitation. However, product developers should not take it for granted that their customers won't expose their devices to uncontrolled environments such as hotel rooms [3].

The Amazon Echo does include a physical mute button that disables the microphone on the top of the device or can be turned off when sensitive information is being discussed (this is a hardwire mechanism and cannot be altered via software). Although the Echo brings about questions of privacy with its 'always listening' microphones, many of us walk around with trackable microphones in our pockets without a second thought.

Product recalls and modifications can be expensive in post production, so physical security should be considered throughout the development life cycle. Physical attacks should also be incorporated into any security assessments as early as possible to increase assurance of the product and save money on not having to produce new hardware prototypes later in product development.

For further information on the lessons manufacturers should take from this research, click here.